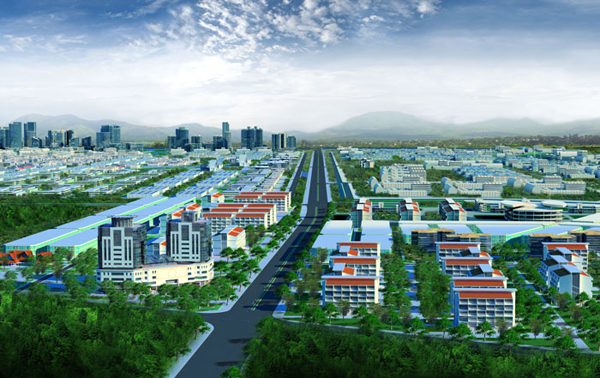 Sembcorp Development, a wholly-owned subsidiary of Sembcorp Industries (Sembcorp), celebrated the groundbreaking today of its fifth and latest Vietnam Singapore Industrial Park (VSIP) development located in Quang Ngai province, central Vietnam. The ceremony was witnessed by the heads of government, Prime Ministers Lee Hsien Loong of Singapore and Nguyen Tan Dung of Vietnam, signifying the continued importance of the well-established VSIP projects as a symbol of bilateral economic cooperation.

Quang Ngai province is strategically located in Vietnam’s central coastal region, where the Vietnamese government aims to attract greater investment. This will encourage the region to grow and avoid development in the country being concentrated only in Hanoi and Ho Chi Minh City. Government-supported investment incentives are being offered to manufacturers in VSIP Quang Ngai, which is situated within the Dung Quat Economic Zone in Quang Ngai province. From VSIP Quang Ngai’s central location, manufacturers will enjoy distribution access to the northern and southern economic zones of Vietnam, as well as to external markets such as Laos, northeastern Thailand and Cambodia. VSIP Quang Ngai’s target industries include food and beverage manufacturing, fast-moving consumer goods (FMCG), electronics assembly and other light industries catering to the oil and gas and chemical sectors.

During the groundbreaking ceremony, three manufacturers were awarded investment licences in VSIP Quang Ngai. URC Central Co of the Philippines, known for its Jack & Jill brand of potato chips, will set up a US$35 million plant, while King Riches (Vietnam) Footwear Co of the Kingmaker Footwear group, a Hong Kong stock exchange-listed company, will invest in a US$20 million plant producing branded footwear. Hebei Xindadong Textiles Co of China also committed to invest US$60 million in a textile manufacturing plant. Some 11,000 jobs will be created as a result of the initial investments by these three companies. In addition, the Philippines’ Liwayway Marketing Corporation and Singapore’s OceanMaster Engineering have signed letters of intent to set up production plants for food manufacturing and marine refrigeration systems respectively.

Aside from VSIP Quang Ngai, VSIP has four other projects across the country, in Binh Duong and Bac Ninh provinces, as well as in Hai Phong City. VSIP Quang Ngai brings the total gross area of the VSIP developments to 6,000 hectares, making VSIP the largest integrated township and industrial park development in Vietnam. To date, VSIP has attracted US$6.4 billion in total investment capital from over 490 companies to Vietnam. Companies operating in the VSIP developments employ more than 140,000 workers. In 2013, VSIP was named the ‘Best Industrial Developer in Vietnam’ by Euromoney.

Launch of the Sembcorp-VSIP Water Initiative

During the groundbreaking ceremony, Sembcorp, VSIP JV Co and the People’s Committee of Quang Ngai province also launched the Sembcorp-VSIP Water Initiative for Quang Ngai. In the first phase of this initiative, Sembcorp and VSIP JV Co will provide clean water to serve over 14,000 people across 10 sites in the Binh Son and Son Tinh districts of Quang Ngai province. A joint committee comprising representatives of Sembcorp, VSIP and the People’s Committee of Quang Ngai will be formed to oversee this initiative, and also assess appropriate solutions to deliver clean water to 10 other locations in Binh Son and Son Tinh in the next phase of the initiative.

Apart from its VSIP project, Sembcorp also made notable progress in its power project in Quang Ngai province – a 1,200-megawatt coal-fired power plant in the Dung Quat Economic Zone. This will be Sembcorp’s second power project in the country. Just two days before the ceremony, Sembcorp’s wholly-owned subsidiary, Sembcorp Utilities, signed a Memorandum of Understanding (MOU) with Vietnam’s Ministry of Industry and Trade (MoIT) for the development of this coal-fired power project under a 25-year build-operate-transfer arrangement. In May 2013, the Vietnamese government awarded approval for the project to be included in Power Master Plan VII, the country’s national power development plan for the period 2011-2020, and appointed Sembcorp Utilities as the project owner and developer. Sembcorp will undertake further studies and carry out subsequent steps for the development of this project in cooperation with MoIT, in accordance with the MOU.

Tang Kin Fei, Sembcorp’s Group President & CEO, said, “2013 marks the fortieth anniversary of the establishment of diplomatic relations between Singapore and Vietnam. Sembcorp is proud to have played, and to continue playing, our part in strengthening these bilateral ties. Our latest VSIP and power projects in Quang Ngai have achieved significant milestones and we believe they will contribute to Vietnam’s economic development, just as our established projects in the country have over the past 17 years.

“Our world-class urban developments provide the economic engine that drive investments into the country, while our utilities facilities supply essential power to support economic growth. At the same time, our water initiative demonstrates that at Sembcorp, we not only provide solutions that support economic development, but we also aim to make a difference by improving the quality of life of the local communities where we operate.”